The links below list additional charts that have been developed to date including decimal/ fraction equivalency, percentage, number grids, and place value charts.

Check out the Customizable Hundreds Number Chart. You can set the start number and the interval, change the number of rows, have negative numbers, decimals, and you can start the numbers from the bottom or the top.

This is an example of a customizable math resource that lets you change the values to make the charts and tables just the way you need them.

We want to do a lot more of this type of user-controlled resource so please contact us to request such a customizable chart and we'll try to add it for you as quickly as we can.

The wall mounting charts include matching numerals 0 to 9 for display below the headers if required.

The place value arrow cards, available in small, medium, and large formats are also a good way to practice.

We used to have seven different number charts but now we only have one! Worry not though as the one that is left has all the features of the other six, all rolled into one. The standard grid is 10 x 10 with numbers starting at 1 although this can be widely customized. The start number, the interval, the number of rows, the number of columns, the range of numbers, and the font-size can all be changed. There are also a couple of handy features - starting the numbers from the bottom-up (helpful for some early-stage students when developing number sense) and the option to skip values at the start of each row which allows large-scale grids to be pasted together in a tile-like manner.

If you are looking for a smaller format, the 4-per-page option below might be of interest. 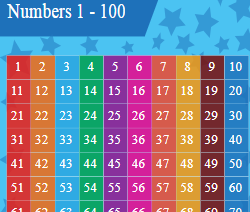 This 17-page resource with printable ten frames provides a variety of different sizes and formats all of which can be used to help your children develop their number sense. It will help, in particular, with number bonds to ten.

There are many games and activities involving dominoes that can help students develop number sense. Just one example is playing "snap" where, for example, the first to shout "snap" when turning over a 1 + 6 domino after a 3 + 4 domino gets the cards.

The two documents below can be printed out (ideally onto card) and cut into individual dominoes. Note: Many students will benefit from making their own domino cards by using the blanks and adding their own dots.

The 4 sets of dominoes below each have 20 dominoes. The first set are for practicing identifying fractions, the second and third sets are on equivalent fractions, and the fourth set cover equivalency of fractions, decimals, and percentages.

The two sets of printable cards below show dominoes for practice with telling time to the hour and half-hour and for telling time to the nearest minute. Both include two pages of cards with blank clock faces for students to make their own time dominoes; this is a great "hands-on" activity which will help many children to develop their sense of time.

The charts are formatted for printing on one sheet of paper. Click the links above and select the Print Chart option to print the charts you want.

Note: The Decimal/ Fractions Equivalents Chart is also included in the By Subject section under Fraction Worksheets and Charts.

Back to top of page
Printables > Math Charts